The final round of matches in the 2020 European Championship Group A sees Italy meet Wales at the Stadio Olimpico in Rome and this is why we prepared for you Italy vs Wales predictions. With Switzerland playing Turkey at the same time and possibly three qualifying places up for grabs for the knockout stage, there's going to be plenty to play for in this match for both teams.

The game will be played on the 20th of June in what is sure to be a packed crowd at the Stadio Olimpico. Italy will be hoping they can take full advantage of playing this fixture at home. Whereas, Wales will be calling on the experience of reaching the semi-final off the 2016 European Championship and specifically the victory over Belgium in the quarter-final. The odds for this match have Italy at 1.50 to win.

Regardless of who comes first or second in this group both of the top two will meet a runner up in the Round of 16. So, simply to win the game and qualify regardless of position in the group will be the main task for both Italy and Wales. Continue below to find out more about this game in our Italy vs Wales betting tips and for the latest Italy vs Wales odds.

Italy qualified for the 2020 European Championship in style having come through their group undefeated and winning all 10 of their games. They finished 12 points clear of Finland, which is a massive gap and enjoyed plenty of success both at home and in away matches. Italy won all 5 of their home qualifying games and were only really pushed close in one of them which was the 2-1 victory over Bosnia and Herzegovina.

We are not the favourites, as all these teams play good football. The fact we are playing in Rome is a small advantage, but every match will still be difficult. I want to single out Wales because they play excellent football and have many of their players in the Premier League. They are solid and not easy to beat. - Roberto Mancini after the groups were drawn, BBC

Every other of their home games in the group ended with a comfortable victory and Italy defeated Finland, Liechtenstein, Greece and Armenia by at least 2 goals. The Italians have a tremendous record when playing on home soil and will be expected to continue that run with a victory in this match.

Open an account at William Hill and find the best live stream for Italy vs Wales!

Having failed to qualify for the 2018 World Cup, Italy will be hoping to make a return to the top of international football. They reached the quarter-final of the 2016 European Championship and will be hoping to go further in this competition. To do that they will want to finish first in this group by winning the game. The Wales vs Italy betting odds have the latter as the favourites. Read on for more Italy vs Wales betting tips and predictions as we take a look at the chances of the Welsh.

Wales qualified for their second successive European Championship by finishing as runners-up in qualifying Group E. They came second to Croatia in the qualifying group having won 4 of their 8 games, losing only twice. However, both defeats came in arguably the two toughest away matches of the group in Croatia and Hungary.

The approach Wales take in this match will depend a lot on what has happened in their previous two games in the group. If the Welsh have already secured enough points to ensure progress to the round of 16, we could see some changes to their team with the knockout stages in mind. However, it is more likely Wales are going to need to pick up something from this match to guarantee their place in the next round of the tournament.

Discover the best Italy vs Wales predictions made by our tipsters!

Wales have played Italy 9 times in their history but have lost 7 of those games. They have never managed to defeat the Italians in Italy but did come out on top in one of their most recent meetings which was in Cardiff on the 16th of October 2002 in a European Championship qualifying match. The betting odds for Italy vs Wales have the latter as clear outsiders. This leaves little hope for Wales in this match. We have more Wales vs Italy predictions below.

3. Other Bets for Wales vs Italy

Italy have always enjoyed home matches against Wales and to look back at previous results they have scored plenty of goals. In fact, in all but one of their previous 6 games on home soil against Wales, Italy have scored 3 or more goals. While this may prove to be a tougher test due to the fact it is in a major tournament, Italy are clear favourites. In the 6 games between Italy and Wales on Italian soil, Wales have managed to score only 3 goals, leaving Italy with 3 clean sheets.

If you are wondering where to watch Wales vs Italy, we have a piece of good news. For those wanting to place a bet on this game and watch all the action as it unfolds you can do so thanks to Italy vs Wales live stream available at 1XBET, Bet365, William Hill, and Unibet. You can register for a free account and qualify for some great bonuses by using our links. With the help of our Italy vs Wales predictions, we hope your bets will be all green!

SandraASchlosser about 1 year ago
Italy didn't have it too difficult though. Winning over Bosnia and Herzegovina, Finland... Even now Group A is not difficult at all. Switzerland, Turkey and Wales. Compare it to Group F Portugal, France and Germany... Somebody has luck in drawing!
Show all comments 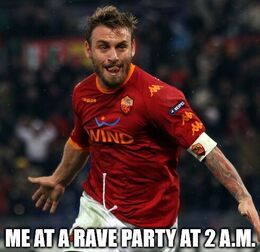 Load more fun
Articles
Play responsibly
Didn't find what you were looking for? Try our lucky clover.
Italy vs Wales