Now that the knock-out stages are here the tournament really moves up a level and that is great news for the punter too, as there will be no shortage of Morocco vs Spain betting tips flying about, so careful scrutiny of every bit of information available is crucial. This certainly is unlikely to be the one-sided affair that the early odds seem to be suggesting, with Spain installed as massive favourites at 1.60 with bet365. Draw is priced at 4.00 and the odds have Morroco to win at 6.50.

Here we preview the form of each of teams, check out Morocco vs France team nes, look at the markets, with some potentially lucrative Morocco vs Spain betting picks, and offer up a couple of predictions to consider.

This game is scheduled to take place on Tuesday 6 December, at the 40,000 capacity, Education City Stadium, 7 miles out of Doha city centre. It is yet another futuristic ground in its design, which takes the shape of a diamond and is referred to locally as the “the diamond in the desert” and with an evening kick-off of 6pm local time, it will create an impressive glow around the immediate surroundings.

Pick your Morocco vs Spain favourites and bet on them at Unibet!

These two teams met at the 2018 tournament in Russia, in a game that finished 2-2, but so much has changed since then that it would be unwise to use that result to take any World Cup tips from. Morocco have made it this far once before, losing to Germany in the round of 16 by just a single goal, all the way back in 1986 in Mexico.

Neither team has played at this stadium in any of their group games, so there can be no advantage gained there. Spain's supreme confidence will have taken a mighty hit by the way Japan overturned them in their final group game, having looked so comfortable at the break, and also they will be more than a little worried by how they seemed to have no answer in the form of a Plan B.

I'm not happy at all. I would have liked to be on top and win but in five minutes Japan scored two. We were dismantled. We didn't have any danger in the first half and then at half-time I told them to be cautious because they had nothing to lose. We collapsed and they could have scored two more goals. I'm not happy at all. I never celebrate defeats so we have nothing to celebrate. We have qualified but I have nothing to celebrate. - Luis Enrique, ESPN

The Atlas Lions have a genuine chance, they won 7 and drew 1 of their qualifying games to get to Qatar, so their pedigree is there for all to see. The Morocco vs Spain best prediction is to continue to expect the unexpected, from a competition where the lesser fancied nations keep producing the goods.

The Morocco vs Spain winner odds, released by the leading brands: Bet365, Pinnacle, and 1XBET, indicate that the Spanish are massive favourites to make it through to the quarter-finals with an early showing of 1.60, whereas Morocco are not given much chance with their best World Cup betting odds being a tempting 6.50, and it is possible to get 4.00 on the draw.

In the alternative markets, and given how games seem to be turning around in the second half on many occasions, the 41.00 for a half-time/full-time of Spain/Morocco, shouldn't be dismissed out of hand, and couple that up with a correct score of 2-1 to the North Africans at 23.00 (both with bet365), and it could be a very profitable evening.

Placing that bet the other way around, so Morocco/Spain, is also a good price at 26.00 and the same scoreline of 2-1 in the Spaniards favour is 10.00.

Should you think they could cancel each other out and take the game into extra-time, then a Moroccan victory would see a return at WC odds of 23.00, whilst it is 11.00 for Spain to win through on penalties.

At half time against the Japanese, Spain were looking so good, many were marking them down a genuine contenders to lift the trophy. By the end of the game they had only scraped into the knock-out stage by the skin of their teeth and also demonstrated that this is potentially one tournament too soon for them. Their two exciting young talents in midfield, Gavi and Pedri were found wanting when needed and it is that inexperience that could cost them dear, even in this seemingly one-sided contest.

Any Morocco vs Spain betting prediction that favoured the Africans would have to be made with caution, but the way they came through their group was very impressive and one thing is for sure, Spain absolutely will not have it all their own way. Often it is the first goal that becomes crucial, but that theory seems to be out of the window in this tournament, where come-backs are all the rage.

Despite their surprising failings against Japan, most tipsters are still likely to favour the Spanish when making any Morocco vs Spain predictions, and maybe the startlingly bad second half performance, once they regain their composure, might just be what they needed to focus their minds and it could turn out to have done them a favour. After all, they are still among World Cup favourites to win the title, which is mentioned in our article including World Cup Final predictions.

When it comes to Morocco vs Spain predicted line-ups, we predict the Morocco starting XI to include Achraf Hakimi (if his ankle injury allows him to play) taking into consideration his effective assits for En-Nesyri's strike. In Spaniards' squad, we predict to see Torres and Alba, who will hopefully show their skills in this game.

Both teams are motivated to play as fiercely as they can. The victory will mean a first-ever quarter-finals for Morocco. Spain, on the other hand, will do their best to make up for their loss in the recent match with Japan.

World Cup online betting is gathering momentum at the tournament and, as with every last 16 fixture, there are going to be heaps of Morocco vs Spain betting tips available. The opportunity to gamble on one of your Morocco vs Spain betting picks free of charge, is not something to pass up and that is exactly what the leading bookmakers are offering to their new account holders.

3.2 How to Bet on Morocco vs Spain

After careful study of the Morocco vs Spain betting tips, punters will want to transfer that tip into an actual online bet. To do so a player should sign-up at one of the top brands, such as Pinnacle and after completing the registering process, deposit a stipulated amount and locate the market applicable to their selection.

Follow the easy to navigate prompts through to the placement of the bet, and within minutes your Morocco vs Spain betting prediction will have become an active wager.

You can also bet on other World Cup matches in the same way. To make you betting decisions easier, we prepared World Cup predictions article – check it out before placing a bet!

Bet on Spain or Morocco at bet365 and enjoy their free bet promotion!

The game will take place on Tuesday 6 December, with a 6pm kick-off local time, at the Education City Stadium.

4.2 ❓ What is the furthest either team has gone in past World Cups?

Morocco reached the Round of 16 in 1986 before losing to Germany; Spain won the competition when it was held in South Africa in 2010.

The Morocco vs Spain odds massively favour the Spanish who are currently best price 1.60, with the North Africans at 6.50, and it is 3.75 for the draw – all at bet365.

Any Morocco vs Spain betting tips that need to be turned into actual bets should be placed at one of the leading brands such as: Bet365, Pinnacle, or 1XBET. 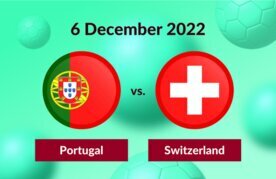