With the group stage practically finished and the first round of the World Cup knockout stage around the corner, we prepared some interesting USA vs Netherlands betting tips for punters who can’t wait to bet on this match. This pairing reflects most of the pre-tournament predictions. The Dutch comfortably won Group A while the Americans – not without a struggle – finished second in Group B. Bookmakers have shared their USA vs Netherlands odds with a clear vision of this fixture with the Netherlands set at favourites to win, available at almost 2.00 with Bet365.

On paper, nothing suggests we might see a surprise here. However, the Dutch players didn’t particularly shine during the group stage, and their American counterparts managed to take one point from England. In our USA vs Netherlands betting preview, we try to establish accurate predictions with a solid value, so read the sections below and find your USA vs Netherlands sure bet among them.

When you look at the Group A table, you may think it was a walk in the park for the Dutch players. But the pitch reality was way different for them. In the first match, they struggled against Senegal and scored winning goals as late as in the last ten minutes. Then, they were on the verge of losing to Ecuador and eventually ended with a lucky draw. Finally, they defeated Qatar, but the hosts were the worst team in this World Cup. Therefore, many experts criticise Louis van Gaal and complain about the Netherlands playing teeth-grinding football.

Why don't you write you think it is terribly boring and you are going home tomorrow because you couldn't care less? That's disappointing but I don't agree with you. That's your opinion but I don't think your opinion is the correct opinion. I think everyone would be rather proud we are progressing to the next round. I think things are not as bad as you say they are. - Louis van Gall about accusations that the Dutch team plays boring football, Daily Mail

However, the USA also has been far from making a good impression in the World Cup. First, they got only a draw from a match against bland and ineffective Wales. In the next game, they scored a valuable point against England, but many consider that game the worst of all World Cup fixtures. In the decisive match against Iran, the Americans won 1-0, proving there are many problems with their efficiency, especially in front of the opponents' goal.

Neutral football fans may not like it, but one of these teams will play in the quarter-final. The quality of players, history, and World Cup experience gives a clear advantage to the Netherlands. But will they finally meet the expectations and confidently outperform the Americans? We will find out on 3 December at 6 pm local time at Khalifa International Stadium in Al Rayyan.

Visit Bet365 and find the best prices for USA vs Netherlands in the World Cup!

Louis van Gall doesn’t have any concerns ahead of this game. Against Qatar, he managed to give rest to some key players such as Matthijs de Ligt, Steven Bergwijn, Teun Koopmeiners, and Steven Berghuis. On the other hand, Gregg Berhalter may have a headache before the kick-off as both Christian Pulisic and Josh Sargent finished the game against Iran with injuries. Their absence will have a huge impact on betting on USA vs Netherlands.

USA and Netherlands have played five friendly games with the Dutch winning the majority of them. The first four exhibition matches between these teams saw the Netherlands taking a victory, but the most recent fixture ended with the Americans' win.

In the World Cup knockout stages, Oranje played against CONCACAF teams twice - in 2014, they defeated Mexico in the Round of 16 and later, they struggled against Costa Rica, eventually winning after penalties. On the other hand, the USA has three consecutive failures against European teams in the knockout rounds of the World Cup - they lost to Italy in 1934, Germany in 2002, and Belgium in 2018.

Without any major injuries, we must expect the strongest XI from the Netherlands. Corey Gakpo will have a chance to score in the fourth WC 2022 match in a row, while the defence block led by Virgil van Dijk will face another difficult challenge. We expect Frenkie de Jong to run the midfield and Memphis Depay to get another start for the Dutch.

The Americans have three main concerns ahead of this game and we have to wait until the very last minute to know how they will handle them. Josh Sargent, Christian Pulisic, and Winston McKennie are all dealing with injuries and it's uncertain which of them will play. Depending on their availability, players such as Kellyn Acosta, Giovanni Reyna, and Jesus Ferreira should jump into the starting lineup.

Right after the final whistles in Group B matches, bookmakers shared their first showings for this match. There are many interesting USA vs Netherlands winner betting odds you can find at Bet365, Unibet, and Pinnacle. The Dutch team is a favourite to win and reach the quarter-final, and USA vs Netherlands betting line allows you to almost double your stake betting on them.

You can multiply your money by almost five teams if you follow the bravest USA vs Netherlands odds and back the Americans. If you believe in extra time and possibly a penalty shoot-out, a draw is available at over 3.00. In such a scenario, Bet365 offers a round price of 10.00 for the Dutch team to qualify after extra time or penalties. Remember to check other betting odds for the World Cup matches and markets gathered in the related articles by JohnnyBet experts.

Get the latest USA vs Netherlands match picks from our online tipsters!

Finally, our last USA vs Netherlands betting prediction is to combine some of the tips above. For example, we encourage you to bet on the combination of under 2.5 goals and not both teams to score; or you can follow our USA vs Netherlands winner predictions and back the Dutch players to win with a clean sheet. This could place them higher in our early betting predictions ahead of the World Cup final available in the related JohnnyBet preview.

With great odds available in that market, we also want to share our USA vs Netherlands correct score prediction. We know that the Dutch players are better, and they are more likely to win. With the US players unable to score many goals, we believe that the most probable results are 1-0 or 2-0 for the Netherlands. Betting online on USA vs Netherlands following one of these scores can bring you whopping profits.

We advise you to consider placing USA vs Netherlands bets using extra money you can claim at Bet365, William Hill, and Unibet. These bookmakers give new players generous bonuses in the form of free bets worth up to €50, with the final amount depending on your location. If you don’t have an account on these websites, open one with our links and promo codes before you take advantage of our USA vs Netherlands betting tips. That way, you can reduce the risk and use a free bet for the USA vs Netherlands match.

4.1 ⚽ What is the USA vs Netherlands date and venue?

USA vs Netherlands is the first of the Round of 16 matches. It will kick off on 3 December at 6 pm local time. Khalifa International Stadium in Al Rayyan will host this fixture.

4.2 ⚽ Have USA and Netherlands met each other in the World Cup?

No. That will be both teams' first encounter in the World Cup. However, USA and Netherlands have played five friendly games in the past, with four wins for the Dutch and one success for the Americans.

4.3 ⚽ What are the latest USA vs Netherlands winner odds?

Top bookmakers such as Bet365, Pinnacle, and Unibet agree that the Dutch team is a favourite to win – punters can back them at almost 2.00. USA is available at just above 4.00 and a draw at around 3.30.

4.4 ⚽ What is the best USA vs Netherlands match prediction?

Given both teams’ performances in the group stage, we believe that the safest bet from our USA vs Netherlands betting tips is for the Dutch team to win with under 2.5 goals scored. 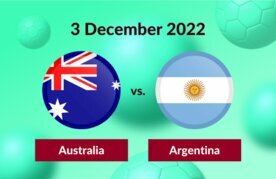 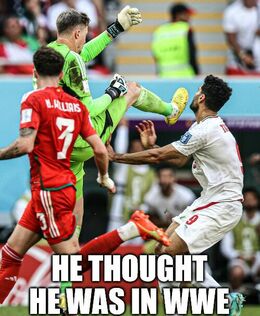 Load more fun
Play responsibly 18+
We use cookies to give you the best online experience. By using our site, you agree to their usage.
Didn't find what you were looking for? Try our lucky clover.
Netherlands